The Highwayman, by Mr Cunningham

The Highwayman by Alfred Noyes

Wow! The book displays along the school corridor have changed and they look ‘pawesome’. They all captured my attention and made me want to read every book that each class has focused on. This time my nose for a good story would ‘lead’ me to the book that Year 6 has been reading – The Highwayman.

There were so many objects on the display; a horse, a sword, a cape, a rose and some coins. This intrigued me as to what the story was about.

To my surprise, when I started reading the book, it was a poem. In the poem were couplets (two consecutive lines that rhyme) metaphors (when an object is described as something else) and similes (when an object is compared to something else using like or as). These really brought the story to life and helped my little imagination create wonderful images of the story. My favourite part of the book was Alfred Noyes’ choice of powerful vocabulary and the way that these made the characters and the action even more dramatic. My least favourite part was when the author described one character as ‘dumb as a dog.’ I was quite offended by this as I’m quite intelligent, I can read books!

My favourite part of the display is the children’s’ writing. They have written their own version of The Highwayman poem using the same structure and style as the author. The pride and care they have taken in their learning stands out and their poems are really enjoyable to read. Taking care and pride in yourself is very important, just look at my new haircut.

I really enjoyed this book and look out for the next time I blog about one the books on display.

Pete the Cat and His Four Groovy Buttons, by Mr Cunningham

Pete the Cat and His Four Groovy Buttons

I have now discovered a love of reading thanks to the book displays that the classes have created along the corridor. There was another book that caught my attention as there was a huge feline staring at me. Immediately, I wanted to chase after this strange, blue cat but I couldn’t help notice that in front of him was an array of buttons. This heightened my curiosity and made me want to discover more about why this cat had so many buttons. I found the book standing next to Pete so I decided to read it.

I soon discovered that this was more than just a story, it was a sing along book that helps children to count.  There were also plenty of adjectives that described the buttons i.e. big, colourful, round and groovy. Although I shouldn’t like cats, I became fond of Pete as when he lost a button, he did not cry, he kept on singing his song which shows he is a happy and groovy cat. (They’re not all like that). I won’t spoil the ending (because I would recommend reading this book) but Pete discovers something different to what you would expect that made me bark out loud.

I also really enjoyed looking at the pictures the Reception children have created and how they have used buttons on their drawings. Also, I enjoyed reading the comments the children made about the story and just like one of the children said, ’I want some groovy buttons too.’

I hope you get to read this book yourself and find out what Pete discovers at the end of the story. As I discovered, not all cats are bad, they are just not ‘purr-fect’ like us dogs.

Port Side Pirates, by Mrs Maguire

After reading one of the books on the corridor display last week, I decided to choose another book to read. I came across Port Side Pirates and I was really intrigued to find out what adventures a pirate gets up to and if they found any treasure.

The display Year 1 has created is fantastic. I particularly like the pictures of the day a pirate came into their class and all the children dressed up as pirates. Also, I had a sniff around for some treasure as there was a treasure chest but all I could find was gold coins with key words on and no bones or doggy treats.

Just like Dougal’s Deep-Sea Diary there was alliteration in the title – Port Side Pirates but unlike Dougal’s Deep Sea Diary, there is a mixture of writing in the book. The main adventure is a poem/song but there is also some information at the back about pirates and pirate ships, which was fascinating.

My favourite part of the book was the adventure the pirates had. They sailed across the deep blue sea, through storms and came across a shipwreck. Can you guess what they found? Of course, treasure. Hoards of gold which made the pirates very happy (If it had been me, I would have been happier to find lots of bones).  On the display, children in Year 1 have written a recount of the adventure as if they were one of the Port Side pirates.

The children have used the key vocabulary on the coins and put them into their writing to make it even more interesting and descriptive. 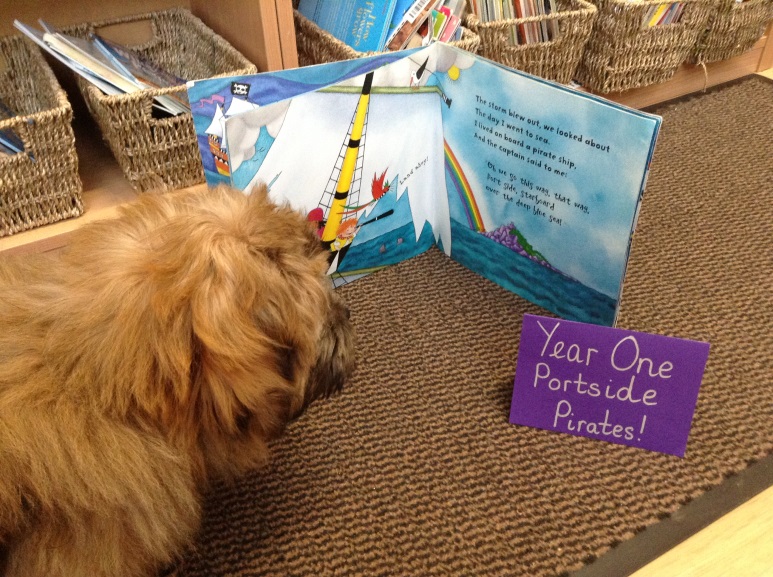 I’m ‘pawsative’ that if you were to pick up this book and read it, you will be smiling from ear ‘terrier’.

I’m very excited to be writing my first ever Bernard’s blog. With so many wonderful things to talk about in school I was unsure where to start. However, this week, as I scampered along the corridor of the school, I noticed that the corridor was brighter and more colourful than last week. I soon discovered that each class had done a display on a book that they were reading in class. There was also a competition to see whose display was the best (this was judged by the children) and the winner was Year 2 who have been reading Dougal’s Deep-Sea Diary. This made me ‘paws’ along the corridor and have a closer look. 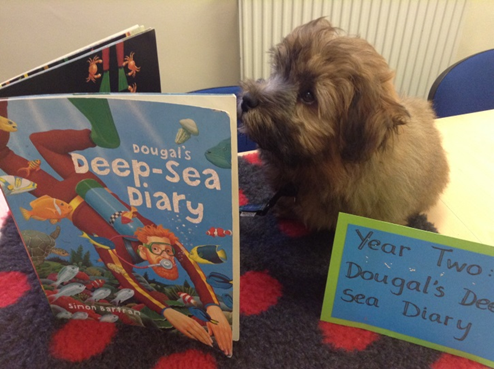 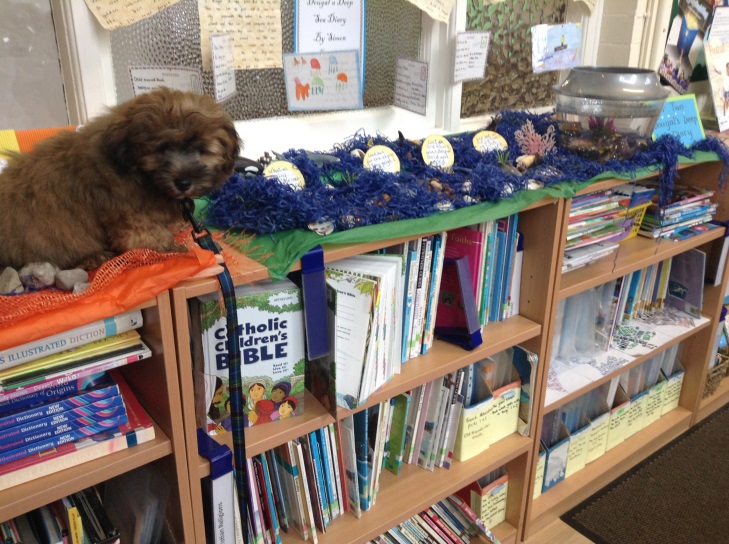 What have I enjoyed the most about this book? It is the writing the children in year 2 have produced after reading the book. They have pretended to be Dougal and have written a diary or a postcard about their adventures in the deep-sea. They are ‘fury, fury’ good and make me as the reader want to find out more about their adventures under the sea. Next time you walk along the school corridor, ‘paws’ and have a read of the book and the children’s writing. See if you can spot any more alliteration.

I have enjoyed reading about this book and Year 2’s writing this week so much that I will choose another book from the book displays next week for Bernard’s Blog.

Welcome to Bernard the Buddy Dog